If not, then let us teach you today the ABCD of Artificial Intelligence…ABCD

They have become a part of our everyday life.

These machines have reached a condition of challenging the way humans think and work.

Data is fed to all the machines running with the help of computer. This data works on the basis of algorithms.

But the machine makers discriminated against them too. For example, feeding robots with data that underestimates women compared to men. Or considers people of dark complexion as a bigger criminal than the people of fair complexion.

The pressure on tech giants to solve this problem is increasing.

They talk to us the way we talk to these machines. These are what we call chatbots or talkative machines.

Designing anything is challenging and time consuming. Creating specially designed cars is not an easy task.

But through artificial intelligence, this work is being done faster and better.

Companies like General Motors and Airbus are using artificial intelligence to create new designs and parts.

The help of artificial intelligence is also being taken to deal with any emergency.

At this time a large population is migrating in the world. According to an estimate, about 68 lakh people have become homeless due to war, war, bad conditions, and natural disasters.

Researchers working with the United Nations have prepared data that can predict the likelihood of a crisis with the help of algorithms.

Not only this, by assessing the news reports, these machines will be able to tell in which area the tension is going to arise.ABCD 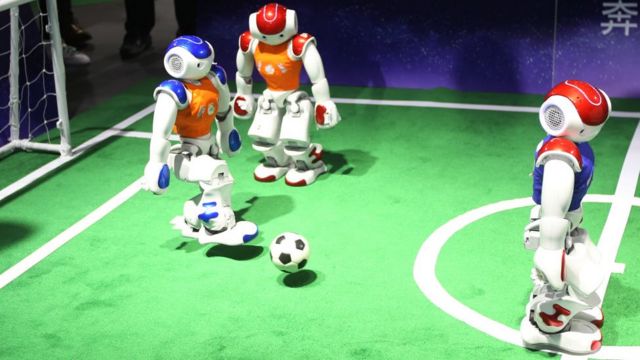 A player’s decision on the field of play changes the course of the whole game.

Football’s Premier League’s biggest club, Chelsea FC, is trying to use artificial intelligence to assess which player is going to make the next bet on the field of play.

This will make it easier for the team to understand the bets of the opposing team. This technology will not only be used in the game of football, but will also be used in other sports.

Photos of older people are often tampered with. But with the help of artificial intelligence, it can be stopped, as well as new pictures can be made through Gain i.e. Generative Adversarial Network.

With the help of algorithms, pictures of celebrities will be fed into a computer and new pictures will be created. Whereas with the help of programming in another computer, the real and fake picture will be identified.

Along with this, it will also be found out whether the picture generated by the computer looks like the original or not.

Initially, the resolution of images made with Gain technology was not good. But now much better pictures are being made.

Human brains often become victims of hallucinations or misunderstandings. This happens with intelligent machines as well. Recently, scientists from the Massachusetts Institute of Technology in the US installed a new version of the algorithm in the machine. After which the machine started recognizing things as something.

If such a mistake happens in a self-driving car, then it can become the cause of a major accident. ABCD

The machine’s point of view of looking at anything is different from that of a human. She thinks better than us in many ways, and inspires people to do new things.

As machine vision researcher and artist Helena Sarin fed some of her drawings into gain software, the machine pulled out so many shades of the same picture that she surprised herself.

The big advantage of artificial intelligence can be taken in the event of traffic jams.

If all the signals are given in the hands of artificial intelligence, then it can be detected in advance where the jam can be done and how it can be controlled.

Artificial intelligence is also being used extensively in fashion and embroidery weaving works.

For example, with the help of Skyknit, such knitting patterns have been created, which are amazing in themselves.

In some machines, a program to write stories, poems for children has also been fed. Although the stories and poems prepared on the basis of this program are ludicrous, but are wonderful in terms of art.

When talking with Facebook chatbot, they start talking in their own language.

The designing of machines with artificial intelligence is such that they collect information like humans. A person learns the pattern of making any thing or thing with the help of a couple of examples.

At the same time, a lot of data has to be fed to teach a small thing to the machine.ABCD

To make machines more and more advanced, scientists are developing such algorithms, after which the machine will start thinking like a human brain.

Machines work faster than human eyes. With the help of artificial intelligence, the symptoms of diseases like eye diseases and cancer are detected even before it develops.

Even a disease like Alzheimer’s can be predicted. Doctors are getting a lot of help from this technique.

The help of artificial intelligence is being taken to catch criminals all over the world. For example, in Britain, the use of detecting any part of the face of criminals is being used to catch them.

Earthquake is such a natural disaster which is impossible to predict. But, now such machines are being made which can tell the place of aftershocks after an earthquake. This will help prevent huge losses.ABCD

R are for rap

There is a strange trend in the world of music abroad. Dialogues are spoken at a high speed in between the songs.

In simple language it is called rap. Rap is spoken so fast that its lyrics are not easily caught. But efforts are being made to make this work easier with artificial intelligence.

In countries which are more technologically advanced, many household chores are being done with the help of machines.

In such countries, with the help of artificial intelligence, those machines can be turned on and off, which are not needed.

The Turing test is considered the most reliable for measuring the scope of artificial intelligence. According to this test, the basis of the ability of a machine is to what extent it can fool a person through things.

This work is also being done through chat bot. But many experts do not consider this test to be correct. According to him, it is not proper to judge the intelligence of a machine on the basis of copying.ABCD

Artificial intelligence is being used to help farmers in Europe and America. It is being used extensively in the cultivation of grapes.

The help of robots is being taken in this work. The robot is fed a program that detects which grapes are best for wine. And which crop is ready to be harvested.

There is a huge amount of valuable wealth in the forests, which is largely stolen and smuggled. Hunting of rare species of animals is also very good. Although drones have been used to monitor this for a long time, but with the help of artificial intelligence, monitoring is being done in the dense forests of East Africa. Due to this, it has helped a lot in stopping the smuggling of ivory, twelve lions and rhino horns. ABCD

Machines are also playing an important role in fulfilling the physical needs of human beings and they have a big role in the sex industry.

There is also a lot of exploitation in the name of sex. Now an attempt is being made to stop this with the use of artificial intelligence.

If you do not feel like cooking in the kitchen, then now you have options for this too. You can cook food through artificial intelligence.

Yes, it is sure that that food may not be able to give the taste of your hands at all. But there must be a means of filling the stomach.

The Nyala deer is an animal found in warm forests, which is found in the forests of South Africa. So winter season becomes trouble for him.

Special arrangements are made for this during the winter season at the Marvel Zoo in Winchester, England. Here heaters with such sensors are installed that according to the need of this animal’s body, prepare the environment for it. This work is also being done with the help of machines.

And, in this way the ABCD of Artificial Intelligence i.e. mechanical intelligence was completed.